Ah, breasts. Here's an article about the evolution of breasts found via reddit. I learned so much about human nature (and myself!) after reading about why women have those wonderful, floppy bags of fat...

I noticed a man walking his strange-looking black pug ahead of me near The Druid on Cambridge Street. When I passed him, I looked back and recognized his face.

me: What's your name?


So, I totally blew my chance to learn everything about documentary film making from Errol Morris. Geeze, who would've thought?! Maybe I'll spot him walking Jackpot some other time, and then I'll be prepared with questions. Although, now that he knows there's some weirdo with a pierced septum who recognizes him, he'll probably change his route...

It's pretty close to official: I'm going to be working at Tabblo a week from Monday! Needless to say, I'm quite excited, but considering it's 11:20 on a Friday night after a long short week, I won't go into the details of my excitement about the future.

I'll say more later, but in the meantime, chickety-check me out on Tabblo. Then, try it out for yourself! 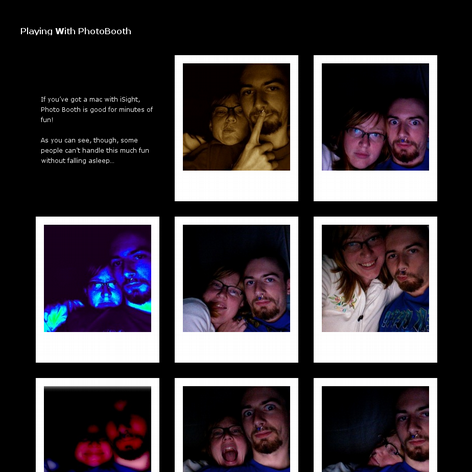 If you've got a mac with iSight, Photo Booth is good for minutes of fun!

As you can see, though, some people can't handle this much fun without falling asleep... ... See my Tabblo>

PyStone results (best of 4 tries for each):

Yes, I'm sure this isn't a scientific test. The Xserve failed miserably. Even though it did have a light load, I'm guessing OS 10.3.9 played a part in its poor performance. I'm also not sure why my lowly Sempron nearly beat the Dual G5...

(I'll also note that the pystone benchmark running inside a Parallels hosted version of FreeBSD 6.1 on the Macbook performed slightly better than the benchmark running natively in OS X! Explain that one to me. [I'll try the test again later])

I'm convinced -- this thing is fast.