I just got back from my first drum and bass night with Eddie and Pavel. I have to admit it was fun. I'll have pictures soon, but first, sleep. Why is typing so difficult right now? hmmm... whatever.

Update: Here's the tabblo of my experience. 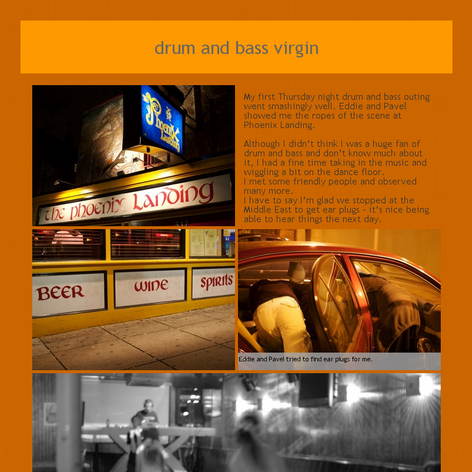 the thrill of life

Last night I mentioned to my broham and sojo that I was secretly hoping to be mugged the other night on my walk home. I said that I wanted to know if my will for self-preservation outweighed whatever petty motive a thief could have for trying to rob me. I postulated that self-preservation would probably win the day, all other things being equal.

I remember strolling down the street at nearly 3 in the morning, with eyes scanning the empty streets. I expected someone to pop out of the bushes and demand my camera and my grandfather's cheap gilded watch. What would I do? I'm not sure. I'd probably say "No." and glare at the person. If he (because women don't rob people, right?) advanced toward me, then what? I don't know. I played the scene out in my mind as I enjoyed the Boston skyline. Nate relayed his experience of having to confront and contain a would-be home invader at a friend's house in New York. It seemed like an awkward and confusing situation.

But I think the situation I was waiting for was the direct confrontation — give up my stuff or face a conflict. I know the buddhist in me would say, well, what use are material possessions? Just give them up. This time, though, I don't think I would've relented. I'm not saying it'd be wise or advisable, but why let someone take something without a fight? After all, as someone smart once said, "Most demons only understand demons."

Regardless, fighting someone over a camera or money still seems like a pointless endeavor. I could imagine a different scenario where a companion of mine were instead attacked by ominous figures lurking in the bushes. What would I do, then? I think the will for preservation would be much stronger in that case because it'd be for my companion's benefit rather than mine. Oh, robbers, you'll rue the day you meet a companion and me in a darkened alley!

In the end, none of that happened. I arrived home safely, with a dearth of adrenaline and no grander perspective on life. I think it can be useful to face one's mortality in some way. Being imprisoned for a couple of days back at the RNC certainly opened my eyes, but that was more of a sustained, uncertain fear than a thrilling challenge. I could use an instinctual challenge to remind myself why I'm here. To remind myself that I should be here.

My toilet has been clogged since yesterday. I meant to get a plunger today, but I forgot. And I've really got to go!

As of a few minutes ago, you can get yer very own Tabblo blog badge like I've got in the sidebar.

As part of basic cable, I have not one, nor two, but three community access channels. I just can't decide which zany Cantabrigian to watch.

p.s. I forgot to mention that those three public access channels are out of a total of 12 channels that I can view. $10/month for 12 channels.