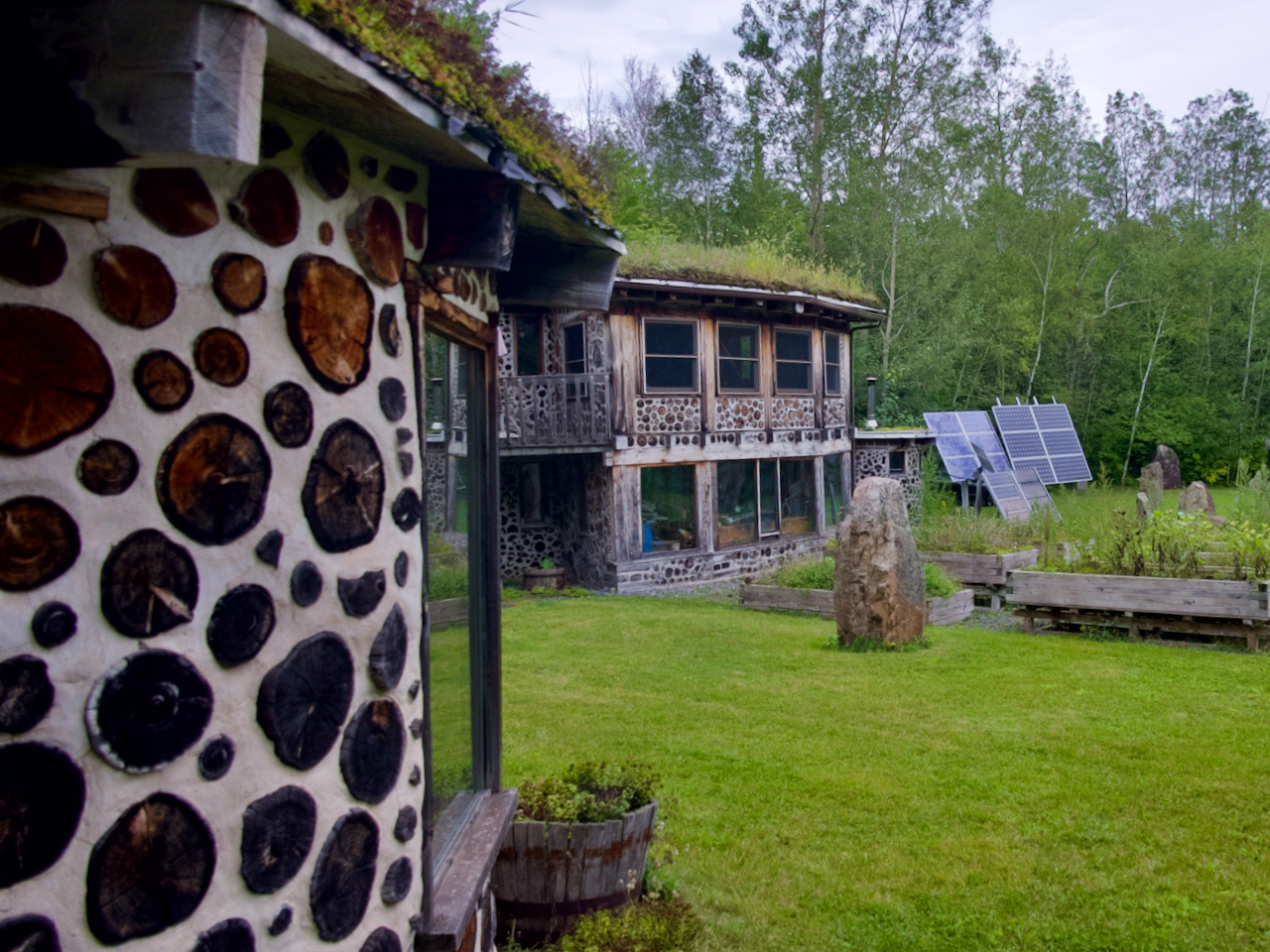 On September 3, I attended the final weekend workshop of the Earthwood Building School, before the founders, Rob and Jaki Roy retire. I found it useful to learn about the building process and get some hands-on experience building cordwood walls. More than that, it was inspiring to see the what they have built over the years. It's one thing to read about alternative architecture; it's another to see up close how the buildings work and weather, and to learn from past mistakes.

For years, I have explored different styles of owner-built, low-energy architecture, looking for construction methods that are appropriate for this climate and ecosystem. Stick-frame and timber frame buildings are certainly easy and compatible, but they carry a lot of embodied energy, especially since when you factor in the insulation, drywall or plywood, fasteners, etc.
I thought that Bill Coperthwaite's yurts held promise, aesthetically and in terms of democratic construction. I even purchased plans for the standard wooden yurt, intending on building one someday. The main weakness I see in wooden yurts is the reliance on a large amount of milled boards, particularly 1x12. Even if I were to purchase rough-cut boards, a small yurt would be quite expensive with today's lumber prices.

So, I was intrigued when I learned about cordwood/cobwood round houses, through Tony Wrench's book. There's a lot of similarity between Tony's and Rob Roy's techniques, except that they differ in material used for mortar (cob vs cement/lime), and the Earthwood style is much more precise and pretty.

The cordwood technique is very labor-intensive, but it should be cheaper than a standard wall, and it likely has less embodied energy. To make cordwood, you need rounds of softwood, between 8-24 inches long. I could cut them with my battery powered chainsaw and use zero fossil fuels (except for the energy required to make the saw…). You also need mortar, which is made from sand, Portland cement or lime, and sawdust. Portland cement is energy-intensive, but I don't have the data to calculate how much energy would be required to mortar a small house. The insulation in a cordwood wall is made from readily-available sawdust, mixed with a small amount of lime. You could use cellulose or any other insulation, but apparently the sawdust method is perfectly usable in the climate of northern New York, where Earthwood lives.

I was surprised at how well the buildings have held up over 40 years, showing no rot on the wood, even on the exposed timber frames. The mortar may need repairing, as cracks develop from cordwood expansion and contraction. Rob said that mold has not been an issue inside their buildings. I suspect that has a lot to do with exposed end grain of the logs – moisture should be able to pass back and forth through the wall. So that breathability could be the major benefit of a cordwood house in this climate. Of course, that's also the biggest weakness in terms of energy efficiency. Every log is a thermal bridge to the outside. In modern building science, the goal is to eliminate thermal bridging, create an air-tight building envelope, and control ventilation mechanically. That's really impossible with cordwood walls. I doubt there will ever be a Passive Haus built using such primitive techniques. But Rob did say that they only burn 3 cords of wood per year to heat their 2000sq ft Earthwood house. I imagine that a <600sqft round house would use much less. (I burn about 1 cord per year to heat 600sqft, but I rely on modern, toxic insulation, rather than sawdust)

I see this as a constant trade-off between upfront cost, long-term maintainability/sustainability, embodied energy, seasonal energy efficiency, and beauty. A small concrete box, buried underground might be the most energy-efficient, but I'd rather not live in one…

I'm excited to try building a cordwood structure. I would likely mix Tony Wrench's roundhouse techniques with the masonry cordwood – in other words, I would build a structural wood "henge" using logs, and a reciprocal roof, and then build a non-load-bearing cordwood wall on the outside of the frame. That mixture of techniques might make the foundation strength a little less critical, and it would allow me to build the frame+roof to cover the log ends underneath while they season. 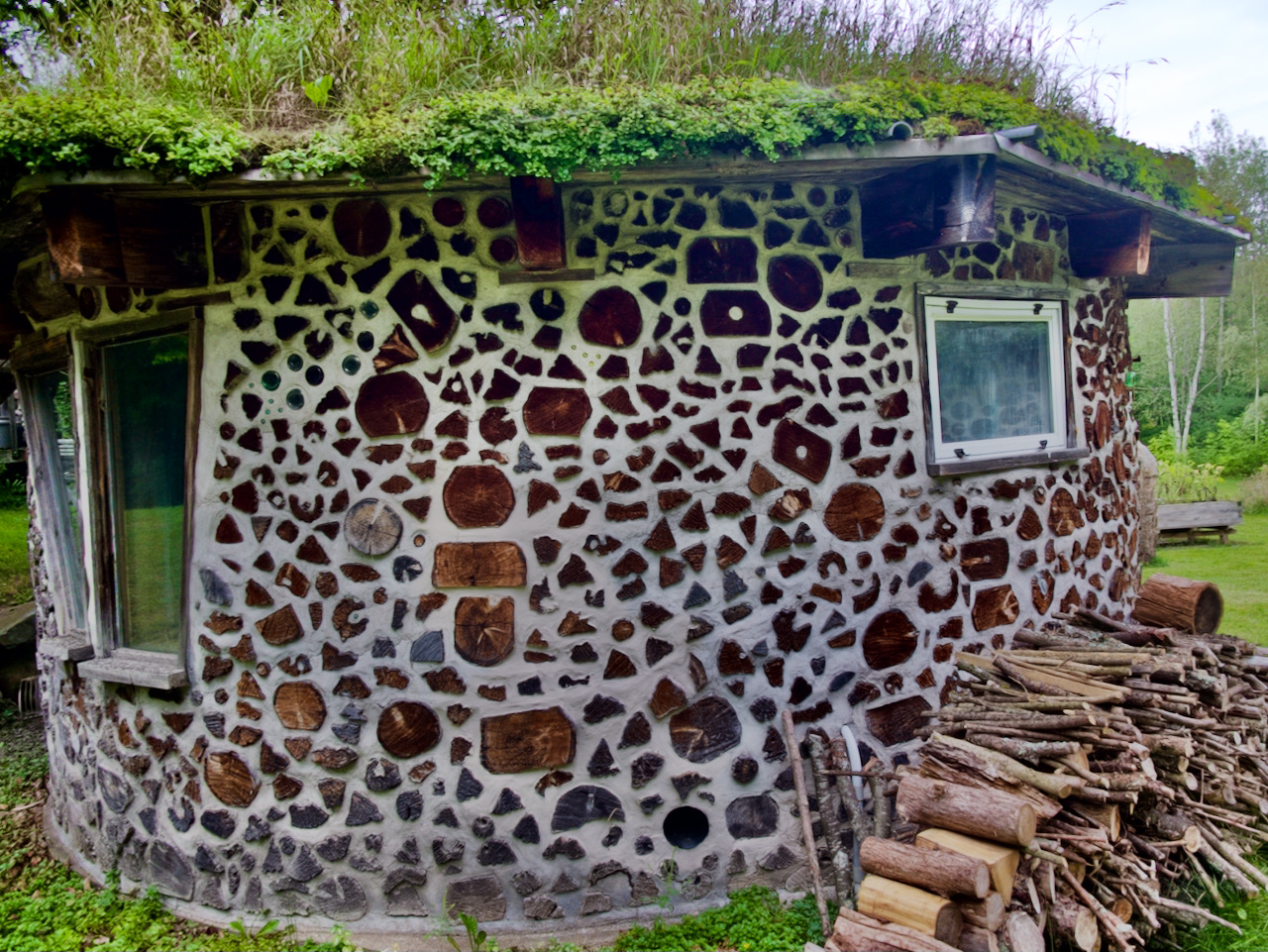 I don't have a need for any new buildings, and I can't really afford to build right now, but I always find it fun to imagine better ways of living in a home. Although I appreciate the efficiency of my current small house, I think there's something more satisfying about a home where the majority of the elements were made by hand, rather than milled or extruded in a distant factory.