(I had started to write a rather scathing review of Into the Wild a week or so ago, but my computer's battery died at some point before I hit save [why didn't I hit save earlier? I should know better]. Now, the forgettable review joins the forgettable movie somewhere in the rear of my brain. I do remember that the tone of the film felt way off from what it should've. It played like a montage of a kid's journey through the country, and I ultimately didn't care about the main character's fate because the one-dimensional acting lead me to believe that he had little to offer, emotionally — certainly less depth than I imagine the real-life Chris McCandless might've contained. I must be in the minority of people who didn't care for the film; I'm too snobbish in my appreciation for great cinematography. Into the Wild fell far short of the "beautiful film" mark, and it didn't help to have Eddie Vedder warbling on top of the film with faux-authenticity.
Oh, and I just remembered the scene where the main character breaks the fourth wall and touches the camera lens. WTF? Delete that scene, Sean Penn! Delete it!)

Although I haven't had much to say lately, rest assured I've been a bundle of feelings. It just so happens that sometimes those feelings are neatly expressed by other people's lyrics. Ryan Adams nails the experience of longing that I've had tugging on my insides recently. I've certainly got a winding wheel in mind.

This is the best I can do at the moment:

Be my winding wheel

Be my winding wheel

Sometimes the people most alive are the ones inches away from death. 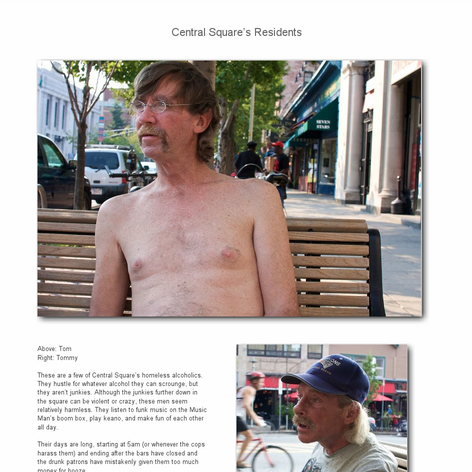 Although he's traveled around the country and lived in Colorado and Vermont, he loves Central Square, even in the winter.

Two tears in a bucket, mother fuck it.

my neighbors are pod-people

When the fire alarm sounded at 6:30 this morning, I was the only person in my building to exit (or notice, it seems) before the fire department arrived.  The boiler in the basement overheated, causing steam to set off the alarm.  The firemen asked if I was "in charge."  No, I'm just the only one who woke up.

Even though I've lived here for about a year, I haven't really spoken to my neighbors, and the only one whose name I know is Larry, an older guy who plays the drums, I think.  I'm not even sure I can recall seeing all of the people who live here (there are at least 15 others).  On the rare occasion when I run into a neighbor, if I say hello, I'm usually met with a blank stare or a meek response.  Despite never talking to anyone else in the building, I have gathered some information about my mysterious neighbors.

Larry smokes, hangs out at 1369 a lot, wears a cool hat, and had a young girlfriend for a while.  The neighbors closest to me, Asian girl and Irish guy, suddenly moved out this month without leaving much trace.  One time, while I was sitting on the steps, they were walking by with some friends, and the guy walked into his apartment, puked for a minute, and strolled back out to his friends.  Hmm.  I haven't seen the new tenant, but he plays "South Park" and "Toccata and Fugue in D Minor" at a loud volume.

Then there's a surly, bearded, middle-aged guy.  He seems annoyed often.  Another neighbor is the quiet saxophone player.  He has intense eyes but looks depressed, lost, or insane.  I can't tell which, but I've tried to say hi a few times.  Dark-haired, scraggily-bearded guy wears mostly black clothes, rides a fix gear bike, has a dark-clothed girlfriend, and isn't friendly.  There's a generic 20-something couple living on the other side of my wall.  They seem nice.

The Chinese couple in their 30's strike me as cold and distant.  They must be doctors or something.  He often smells like alcohol.

Another couple seems to share a love for crazy, curly, black hair.  They are short, quiet and strange-looking.

My neighbors directly above me scare me a little.  One has a nervous, maniacal laugh that penetrates through the walls and down the pipes.  The other has similarly jarring whooping cough fits from time to time.  I have not identified these people visually.

There are a couple of fresh-faced girls who live in the building – probably busy grad students.  I never hear a peep out of most of the other apartments here.

Ok, maybe my neighbors aren't pod-people, but one year in, I'm still perplexed about who exactly lives here.  Is there a common thread among us besides a willingness to pay exorbitant rent?  Perhaps I'll get to the bottom of this mystery some time this year.  At the very least, I'll try to say hello a little more forcefully, and, as a last resort, I may even smile at my neighbors.